Alexandra Cardiel and Zac Elz of the Kappa Sigma chapter at South Georgia State College’s (SGSC) Douglas campus each received a prestigious regional award at the Georgia Region Conference on March 23 – 24, 2018. The event was held at Atlanta Metropolitan State College.

The Georgia Region Sarah Anne Staples award was given to Alexandra Cardiel. Sarah Anne Staples was a driving force for Georgia’s Phi Theta Kappa (PTK) organization. For over 35 years, she served as the advisor for Andrew College’s chapter. Under her leadership, Andrew College won more awards for academic excellence than any other two year college in the nation. She served in numerous capacities on the regional and national level including her 15 years on the International Board of Directors for Phi Theta Kappa. She received her BA in Biology and Chemistry from Georgia State College (now Georgia College and State University) and her M.S. in Bacteriology from the University of Georgia. It was quite fitting for Alexandra, the Kappa Sigma chapter president, to receive this award since she is pursuing a degree in biological science.

“The reason Alexandra was nominated for this award is because she goes above and beyond to do anything related to Phi Theta Kappa. She embodies the ideals set forth by Ms. Staples in that she takes on tasks, gets them done and looks for more things to do when they are over,” explains Amy Hancock, SGSC PTK advisor. “As a fellow chapter members expressed, Alexandra has an aura about her that is significant in the fact that once it is noticed, it is impossible to be ignored. Her energy, enthusiasm and ideas have had an impact on our chapter.”

Zac Elz, a student-athlete on SGSC’s nationally recognized swim team, has a full plate with swim practices and meets in addition to classes and his role as a resident assistant in the residence halls. Zac received the Georgia Region Hall of Honor award as it serves as a way to recognize students who demonstrate outstanding leadership abilities and foster an environment of successful teamwork within the chapter.

Advisor Amy Hancock states, “From the first semester Zac was at SGSC, he heard about Phi Theta Kappa and wanted to join. As soon as he reached the eligibility requirements for hours completed at the end of that semester and with his excellent grade point average, he became a member. In his time at the college, he has remained involved on the local, regional and international levels despite his busy school and work schedules. As vice president of the chapter, he led the members in completing the PTK college project and attended the international convention where he learned as much as he could about Phi Theta Kappa and brought it back to SGSC to share with members. His dedication to PTK made him the perfect nomination for this award.”

“We are very proud of Alexandra and Zac on their recognition as leaders and scholars by the Phi Theta Kappa Honor Society. The work of these two students reflect how diligence and a commitment to serve make a difference to society, “ says Dr. Ingrid Thompson-Sellers, SGSC president.

Phi Theta Kappa Honor Society, headquartered in Jackson, Mississippi, is the largest honor society in higher education with 1,285 chapters on college campuses in all 50 of the United States, plus Canada, Germany, the Republic of Palau, Peru, the Republic of the Marshall Islands, the Federated States of Micronesia, the British Virgin Islands, the United Arab Emirates and U.S. territorial possessions. More than 3 million students have been inducted since its founding in 1918, with approximately 134,000 students inducted annually. 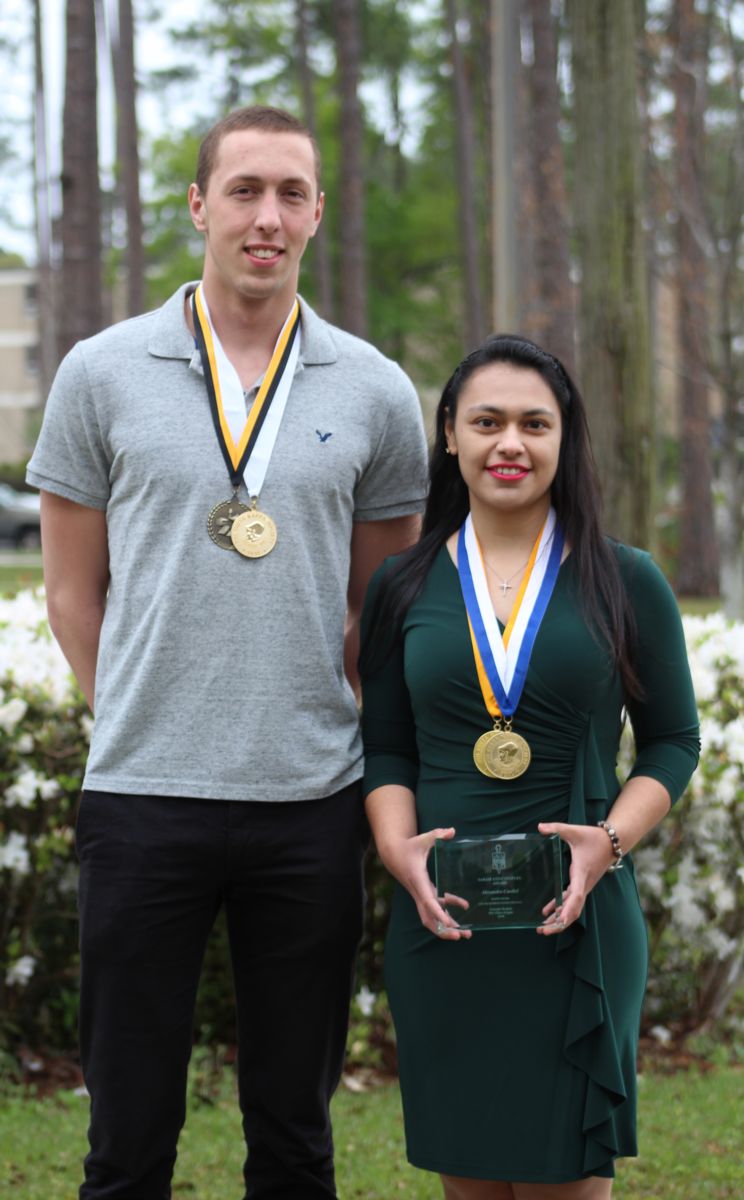