When the dust had settled and all was said and done on the Albany State University-West Campus on Friday, May 10, 2019, the South Georgia State College (SGSC) Hawks baseball team walked away with the title of National Junior College Athletic Association (NJCAA) Region XVII Division I region runner-up.

SGSC is a member school of the Georgia Collegiate Athletic Association (GCAA) and the NJCAA, both with the mission to promote and foster the education and development of college students, especially junior college students, through intercollegiate athletic competition. As shown by the social media posts of many of the Hawks with the hashtag #JUCOPRODUCT, being a part of a NJCAA member school has played an important role in their athletic journey.

“There’s nothing like being a JUCO athlete. The teammates and relationships I’ve made the last two years are something I will never forget,” said Hawks’ third baseman, David Meadows. “Our team this year went through our ups and downs, but when it came tournament time, we played our best baseball and made a good run. We may have come up short, but there wasn’t a better group of guys to have by my side.”

Blake Ebo, outfielder for SGSC, agreed with Meadows. “JUCO baseball has made me a better man. The teammates I have acquired this past year are now brothers for life,” he said. “Going to the tournament with them and seeing them all fight to win was what kept me going the whole time. I love my teammates and coaches. The 2018-2019 season was a year of my life I will always remember.”

In a recap of the tournament, SGSC played its first game on Wednesday, May 8th, and lost to Gordon State College in eleven innings by a score of 4-3, even after a late two-run rally by the Hawks in the top of the 9th inning. Credited with two hits was Justin Brooks, Tyler Spence, Blake Ebo and JT Rice. Ebo and Spence each earned a double. Cole Escher, Tyler Salomon and Blake Brito added one hit each. Matt Thompson was on the mound for most of the game, allowing five hits and three runs, along with eight strikeouts and three walks. Noah Detrick and Landon Nevill each took a turn pitching for the Hawks. This loss moved them into a slot to play later that day.

The second game of the tournament turned into a win for SGSC as they defeated Georgia Highlands, 8-5. Cole Escher, Tyler Salomon, David Meadows and Justin Brooks had two hits each as Meadows turned one of his hits into a double. Greg Wozniak’s single came in the form of a home run while Blake Ebo, Tim Martin and Walker Sinclair contributed one hit apiece. Meadows also lead in RBI’s with a total of three. Landon Nevill, Tanner Jones and Austin Knowles each took their turn on the mound to contribute to the win.

Game three on Thursday, May 9th, ended with a victory over East Georgia State College by a score of 8-6. Leading the Hawks with three hits each were Justin Brooks and Blake Ebo. Tyler Spence, with a double, and David Meadows contributed two hits. Cole Escher, also with a double, and Tyler Salomon, Blake Metcalfe, Blake Brito and Tim Martin each added one hit. Starting on the mound was Cody Ogilvie, allowing five hits and five runs, with three strikeouts and three walks. Noah Detrick and Austin Knowles each pitched during the game. This win put the Hawks into the championship game facing Gordon State College once again.

The final game of the tournament took place on Friday, May 10th. After a hard fought, almost four-hour game, Gordon State College came out on top with a score of 18-11. David Meadows led the team in hits with a total of four, followed by Greg Wozniak with three, each earning a double during one of their times at bat. Justin Brooks, Tyler Spence, Blake Ebo and Tim Martin contributed two hits apiece with Martin hitting an out of the park home run during one of his plate appearances. Tucker Jordan is credited with one hit.  Taking a turn on the mound for the Hawks were Adam Benefield, Andrew Curtin, Grant Rylee, Patrick Hickox, Tanner Jones, Landon Nevill and Buck Bennett.

Justin Brooks, shortstop for the Hawks, summarized the season by saying, “Even though the odds were against us, we were able to accomplish a lot. Personally, it meant so much to be rewarded with a spot on the All-Tournament Team. Also, being a JUCO player helped me learn on the field, but it also gave me the chance to meet good people and make lifelong friends. I’m glad I have had the chance to play at an NJCAA school and with the Hawks.” 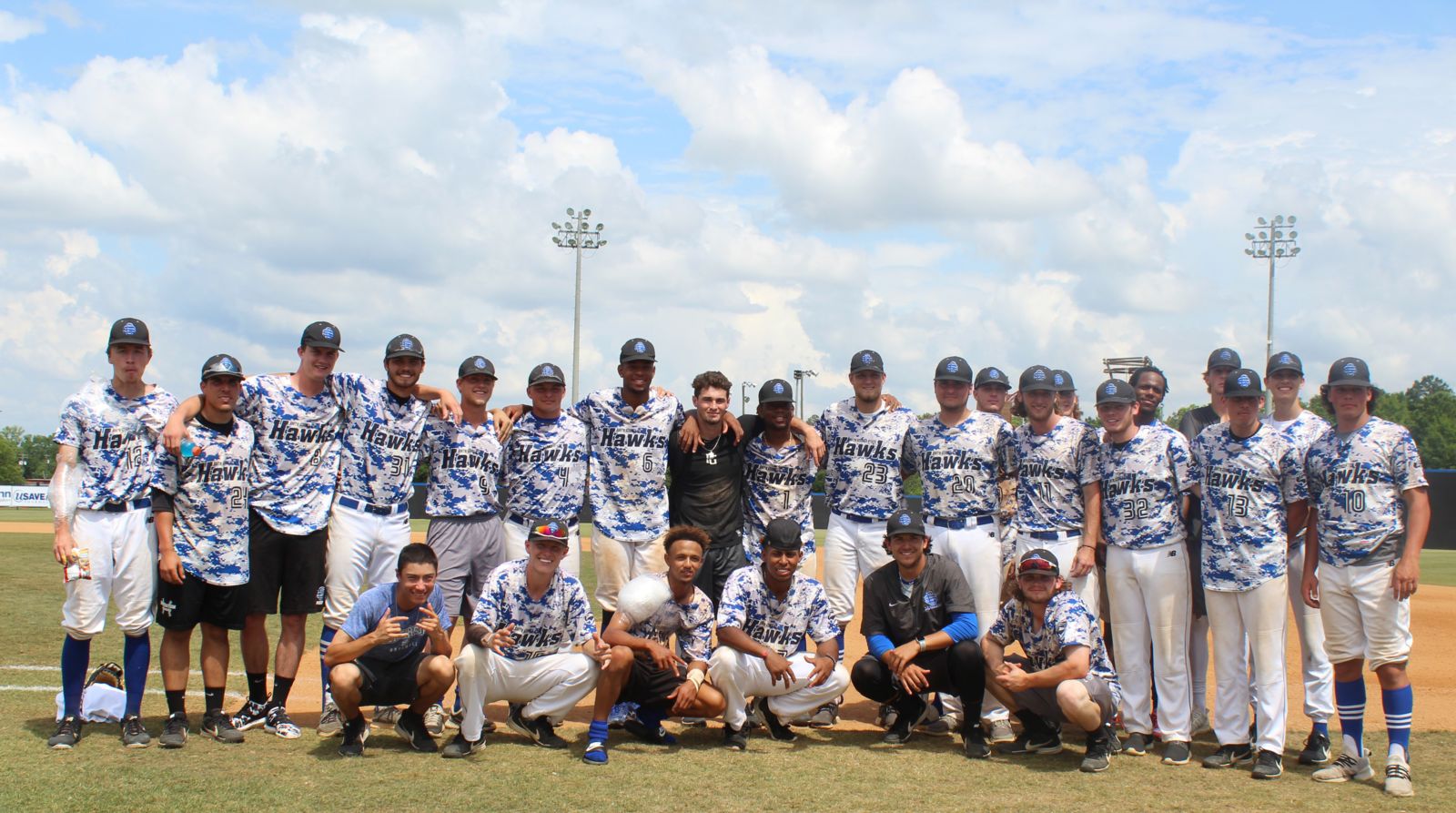